With so many delicious treats, events, and decorations, Halloween is one of the best times to visit Walt Disney World Resort. There is so much to do and enjoy, but the hallmark experience is Mickey's Not-So-Scary Halloween Party. Special activities, treats, and characters make this Halloween Party one for the entire family to enjoy.

This is an event that sells out quickly, so if you'd like to go, it's important to plan ahead. Fortunately, our handy guide will provide you with everything you need to know to make the most of the party. Let's get started!

BEST DEAL ALERT Save when you bundle tickets + hotel. Book both your Walt Disney World hotel and tickets and save up to $50 per person. They guarantee the lowest prices through price match and provide 10/10 customer service. Book now >

Watch as villains light up the night sky over Cinderella Castle and Main Street, USA. With colors, projections, and pyrotechnics, this is one fireworks show that you won't want to miss. Plus, you'll hear some of the most beloved “spooky” Disney songs of all time including “Poor Unfortunate Souls” from The Little Mermaid, “Never Smile at a Crocodile” from Peter Pan, and “Who's Afraid of the Big, Bad Wolf?” from The Three Little Pigs. 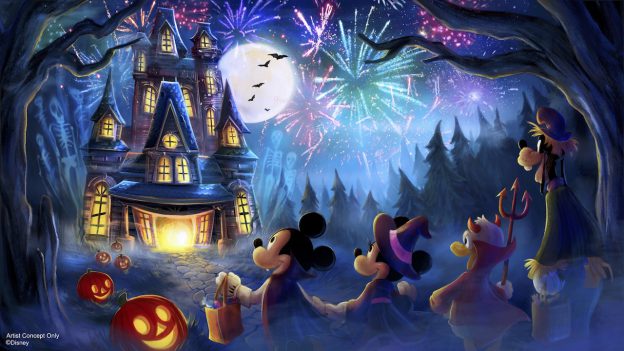 Hosted by Jack Skellington from Tim Burton’s “The Nightmare Before Christmas” this new firework show will feature fireworks, lasers, and lighting above Magic Kingdom. The storyline goes that Jack has come to tell a not-so-scary story about how anything can happen on Halloween night. Jack’s ghost dog, Zero, then flies off carrying everyone along on a trick-or-treating adventure, where four friends – Mickey, Minnie, Donald and Goofy – find themselves drawn into a mysterious haunted house. Their journey takes them from one room of the house to another, encountering dancing skeletons, waltzing ghosts and a whole series of troublemaking Disney villains.

The firework show typically kicks off at 10:15 PM during the party. It can get fairly congested, so you'll want to line up early for the best views.

This parade is unlike any you've ever seen at Walt Disney World, as it features rare characters, music, dancing, and floats. You'll be greeted by the Headless Horseman himself who rides down the parade route, inviting costumed Disney characters and villains to follow including Mickey and Friends, the Hitchhiking Ghosts, Jack Sparrow, Winnie-the-Pooh, Wreck-it-Ralph, and more. One of the highlights of the parade comes from the Haunted Mansion Gravediggers, who scrape their shovels along the pavement to create beautiful sparks.

You can watch the parade at both 9:15 and 11:15 PM, choosing between viewing areas in Main Street, Liberty Square, and Frontierland.

New this year: a new parade float featuring  The Incredibles and designer extraordinaire Edna Mode followed by Buzz Lightyear and Alien explorers discovering crystalline treasures on the surface of a planetary playset float. Also new this year, the Haunted Mansion float will feature the spectral Bride.

Join the Sanderson Sisters from the cult classic film Hocus Pocus in their Halloween festival as they attempt to cast a spell over the audience with help from friends like Maleficent and Dr. Facilier. The whole family is sure to enjoy this event complete with music, dancers, and special effects.

Showtimes are offered at 8:15 PM, 10:45 PM, and 12:00 AM right in front of Cinderella Castle. The various showtimes will ensure you can work this frightfully fun event into your party plan.

Main Street favorites, The Dapper Dans, are ghoulishly transformed into The Cadaver Dans, and you'll find them performing haunting medleys throughout the party in Frontierland.

Join all your friends from Monstropolis in a monster mash-type dance party. You'll find them in Tomorrowland at the Rockettower Plaza Stage.

If you have any food allergies, you can grab a specially-colored bag at either the Town Square Theater or Heritage House. You'll then collect tokens at each trick-or-treat location that can be redeemed for allergy-friendly treats later at special locations.

For the Halloween party you can find characters at these locations:

Costumes are welcome and encouraged at Mickey's Not-So-Scary Halloween Party! There are some rules that you'll want to be aware of. Keep reading for the current guidelines.

Also, don't forget that it may be rainy or extremely not, so you may want to plan accordingly as you put together your costume.

Do the rides stay open during Mickey's Not-So-Scary Halloween Party?

Select rides in the Magic Kingdom remain open during Mickey's Not-So-Scary Halloween Party. You'll have full access to these rides during the Halloween party. Since it's a special event, that usually means shorter lines which is one of the major perks of attending. Also, many guests are focused on the candy and other entertainment options during the event. FastPass+ is not offered during the party but it's generally not needed sine the lines are shorter!

Here are the available rides:

Be aware that some rides will close sporadically though, just as they do throughout regular operating hours.

New in 2020, delight in twists and treats at some beloved attractions!

The sweetest part of the night is undoubtedly the delicious seasonal treat offerings available to guests. There are several that are only available during the Halloween party. In 2017, these included the amazing chocolate Haunted Mansion portrait treats pictured above, Pumpkin Cheesecake Domes, white chocolate Jack Skellington desserts, pumpkin Mickey Waffle sundaes, Worms and Dirt Gravestones, Candy Corn Ice Cream, and special rice crispy treats and brownies.

Plus, participate in Dessert Parties if you'd like. Specific offerings change annually but there will be plenty of tasty options for even the pickiest of eaters! You'll find these at various locations throughout the park.

Exclusive hauntingly real PhotoPass Magic Shots will also be available in different locations throughout the park during the Halloween party. Some locations will even have special props to make the scenes even more interactive and realistically fun. If you want to take advantage of these, you may want to consider purchasing Memory Maker before the party. At $59 for one day, you'll receive unlimited downloads of PhotoPass shots and discounts on prints.

The Halloween party takes place in the Magic Kingdom from 7:00 PM to Midnight.

The 2020 party takes place on the following dates:

Prices will also vary based on event night, make sure to buy your tickets in advance to get the best deals. Tickets are always $10 more the day of the event.

You will always save $10 on tickets by purchasing in advance.

Annual passholders and DVC members will save $5 per ticket.

As I previously mentioned, tickets can sell out very quickly so we recommend buying them as soon as they go on sale!

Mickey's Not-So-Scary Halloween Party is only one of many amazing special events at Walt Disney World Resort. For more information about all of these offerings and for help planning your dream vacation, you'll want subscribe to our newsletter. It is absolutely free and provides exclusive deals not available anywhere else!

Thanks for joining us as we explore Mickey's Not-So-Scary Halloween Party, and Happy Halloween! For current showtimes, see official website.

Next Post: Best Guide to a Beach Day on Your Disneyland Vacation